Dialect of a Cornish farmer… 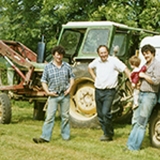 John farmed at St.Wenn, a small rural village in mid Cornwall. John was brought up on his family farm and has farmed all his life. John has a strong Cornish accent and often uses dialect words when he talks. Dialect is the term given to words that are special to a certain area and have developed over time through people using them. They are often just spoken and not written down. There are lots of dialects around the UK and dialect also varies around Cornwall.

Print out the Cornish dialect words and cut these into individual words to use in the matching game.
You may wish to do some online research at this stage to get children to see what dialect words they can find. Many areas have specific websites hosting collections of dialect. This may be particularly relevant if you are outside of Cornwall.

Fold the dialect words up and place them in a hat/box/bucket.
Keep the corresponding common words separate and spread these out on the floor for everyone to see. Alternatively find pictures of each word online and match dialect with these.

Refer to the list within the word document and provide children with clues if needed.

Make an alphabet
When everyone has a pair of words, get children to sort themselves into alphabetical order.

Find images of each dialect word
To help children imagine their dialect creature/object you may find it useful to print out some pictures for each dialect word. This could be done as online research.

Discuss adjectives, verbs, nouns and alliteration.
Get pupils to come up with a verb, adjective and noun to accompany the creature or object they picked. Use alliteration for each word. For example… A reckless, racing rare-mouse (bat).

Share these combinations with the class and begin verbal storytelling
Going around the class ask each child to read out their string of alliterated words and encourage them to further expand on this narrative though prompts. Get children to use their imagination to tell the class about their dialect word. Write dialect sentences on the board.

This can be done individually, in pairs or small groups. It can also be done as a class, building a story together.

Get children to make models of their creature/object
Using clay or other modelling materials, get children to create the character from their story (as above). Natural found materials such as feathers, pebbles, shells and sticks make great additions to clay.

Add the dialect word and chosen adjective, verb and noun to the model.
Use parcel labels or cards to write down the alliterated descriptions for each model and display them together. You may also wish to display the written stories alongside these and can choose to display them in alphabetical order.