About Mickie
Mickie came to Cornwall in 1939 as a volunteer for the Women’s Land Army in the Second World War. Because many young male farm workers were called to fight in the war, women volunteers were needed to help on farms. Women did many different jobs, including looking after animals, harvesting crops, ploughing fields, milking cows and general farm maintenance. Land Girls were either sent to live and work on one farm, or they were sent to hostels, where they would live with other Land Girls, and work on different local farms.

By 1944, there were around 80,000 Land Girls helping in the war effort. They were paid the equivalent of about £20 a week and were expected to work very long hours.

These two stories are about different stages of Mickie’s time in the Women’s Land Army and should be watched in order.

Imagine you are one of the girls who joined Mickie on the train from Yorkshire. Your parents have asked you to write to them as soon as you arrive.
The train journey from Leeds took 10 hours during wartime. Many of the girls would never have been away from home and some might never have been on a train. People didn’t have emails, telephones or mobiles, so letters were the only way to communicate.

Get children to describe their journey to Penzance. Encourage them to imagine how they felt on arriving and describe where they were billeted (were they sent to a farm or hostel?)

Imagine you have been in the Land Army for two weeks. You have received a letter back from your parents asking you how you are settling in and what you’ve been up to?
The Land Girls were expected to do any job that was asked of them by the farmer. Many girls would have never been on a farm before this.

Get children to describe their experiences of working on a farm and what they have been doing? Have they made any friends? How are they feeling being away from home?

Imagine you have been asked to be a driver for the Land Army. You’re bursting to tell your parents about what it’s like driving in wartime.
Get children to describe their experience of learning to drive and driving in wartime. What is it like driving that big lorry? Remember there were no signs, not many cars on the road and you couldn’t ask directions in case they thought you were a spy!

Make your Land Girl’s body using scrunched and twisted newspaper, and secure/shape this using masking tape
Use roughly 3/5 sheets of newspaper per model. Keep sculpting the newspaper and tape as you go to get the Land Girl’s body into the shape you want

During the Second World War the government needed people to work a variety of different jobs. Sometimes people weren’t given a choice and were told where they had to work (for example going into the army). For other jobs, the government would try and attract people with the use of promotional posters, such as the ones in Mickie’s Story. 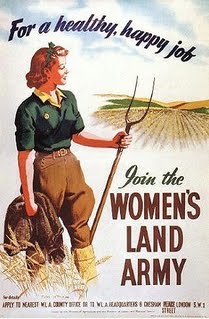 Watch the first film again and get children to look out for the posters. You may want to pause the film to have a closer look at these.
Ask your class if these posters would have encouraged them to become a Land Girl? What scene has been painted in the posters?

Think about the design of these; the images/writing/colours/layout etc

Get children to create slogans that they will use on their own poster design to attract women to the Land Army
Ask children to consider what would attract them to work on farms during wartime?

Ask each child to make a wartime poster, using the slogan they have created
Begin by getting children to draw their poster design using pencil on paper. They may want to sketch this out on scrap paper first. Encourage children to think what image they want to use to attract people to join the Land Army.

To give the poster a bold finish, get children to trace the edges of their design with a black or grey felt tip pen.